Yamazaki Sherry Cask – Is it the Really the Best Whisky in the World?

Torben is a close friend of mine. Yes, we have yet to meet in personam, but we’re Facebook whisky friends, and share similar professional backgrounds. And he’s a great guy! We have a pretty constant exchange of samples going back and forth, and at any given time there’s usually a package en route from one of us to the other. In the last package, a surprise awaited me, as Torben sent me a sample of the Yamazaki Sherry Cask (the 2010 edition). I was amused to learn that while in transit, it was decreed (in scripture, no less) that the 2013 version of it is the best whisky in the world with a score of 97.5 points.

As a reader of this blog you know that I don’t score the whiskys I taste. I’ll describe what I see, smell and taste, and give you my honest opinion about the whisky, vis-à-vis quality and price. I honestly don’t think that a scale of 1-100 can be used consistently to rate whisky. I mean, what’s the difference between a 95 and a 94? And between those two and a 94.5? And tasted blind, would you score them the same every time? So yes, Yoav (of Whisky Gospel) and I will talk about rating when we have tastings together, but neither of us score in our blogs. How is it, then, determined that the BEST whisky in the world is a 97.5 and the SECOND BESTS only a 97? Thus, with all due respect, I don’t subscribe to the concept of “the best whisky in the world”. Sure, I have my top 10 drams of all times, and I assure you that none of them are the best whisky in the world.

Getting to the whisky at hand, the Yamazaki Sherry Cask, I can tell you it’s a lovely sherry bomb, with a complex nose and a surprisingly intense palate. For its original price of about $110 (€80 in the exchange rate then), it’s a good dram. But the world has gone mad, as I just saw a 50 ml sample of it offered on ebay for €101. For a sample! That’s €1414 for the bottle, and I’ve seen bottles this week for as high as €1875.  Guys, this is a normal run of the mill sherry bomb, not all that different from the a’Bunadh or the Glenfarclas 105, just at a lower ABV. Good whisky, even very good whisky, but not so amazing as to justify costing twenty five fold what a bottle of a’Bunadh would. 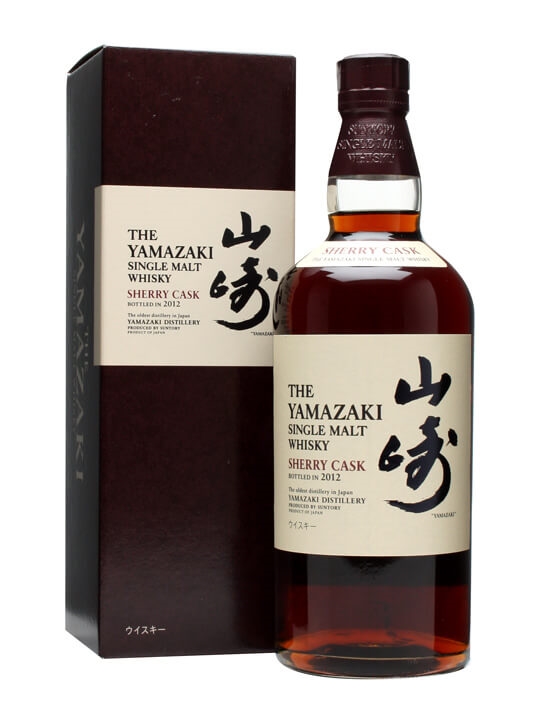 Nose: First you get the intense Oloroso sherry, very reminiscent of the a’Bunadh. Sultana raisins and prunes greet the nose, but they are not heavy on the spices with light cinnamon and clove and a sweet Christmas cake. Covered for a while you get a somewhat sour nose. The malt is richly there with cherry, sour berries, plum brandy and an underlying dusty balsamic note with a hint of licorice.

Palate: Very dry with cooked dried cherries and plums. The palate is surprisingly intense with the spices – cinnamon, pepper and clove in a sweet liquid with clear notes of sherry in that sweetness.

Linger: Sweet on the tongue with prunes and sultanas. Cinnamon and clove assert themselves in the back of the throat. Both the sweet and the spicy notes remain for a very long finish.

This is a beautifully intense sherry bomb, with the palate and the linger being particularly noteworthy. Despite being an excellent dram, it’s squarely in the league of the Glendronach 15 and 18, the Aberlour a’Bunadh and the Glenfarclas 105. The “Japanese effect” can only add so much value to the whisky. Thus, at current price levels, it’s best left to bible thumpers.

6 comments on “Yamazaki Sherry Cask – Is it the Really the Best Whisky in the World?”