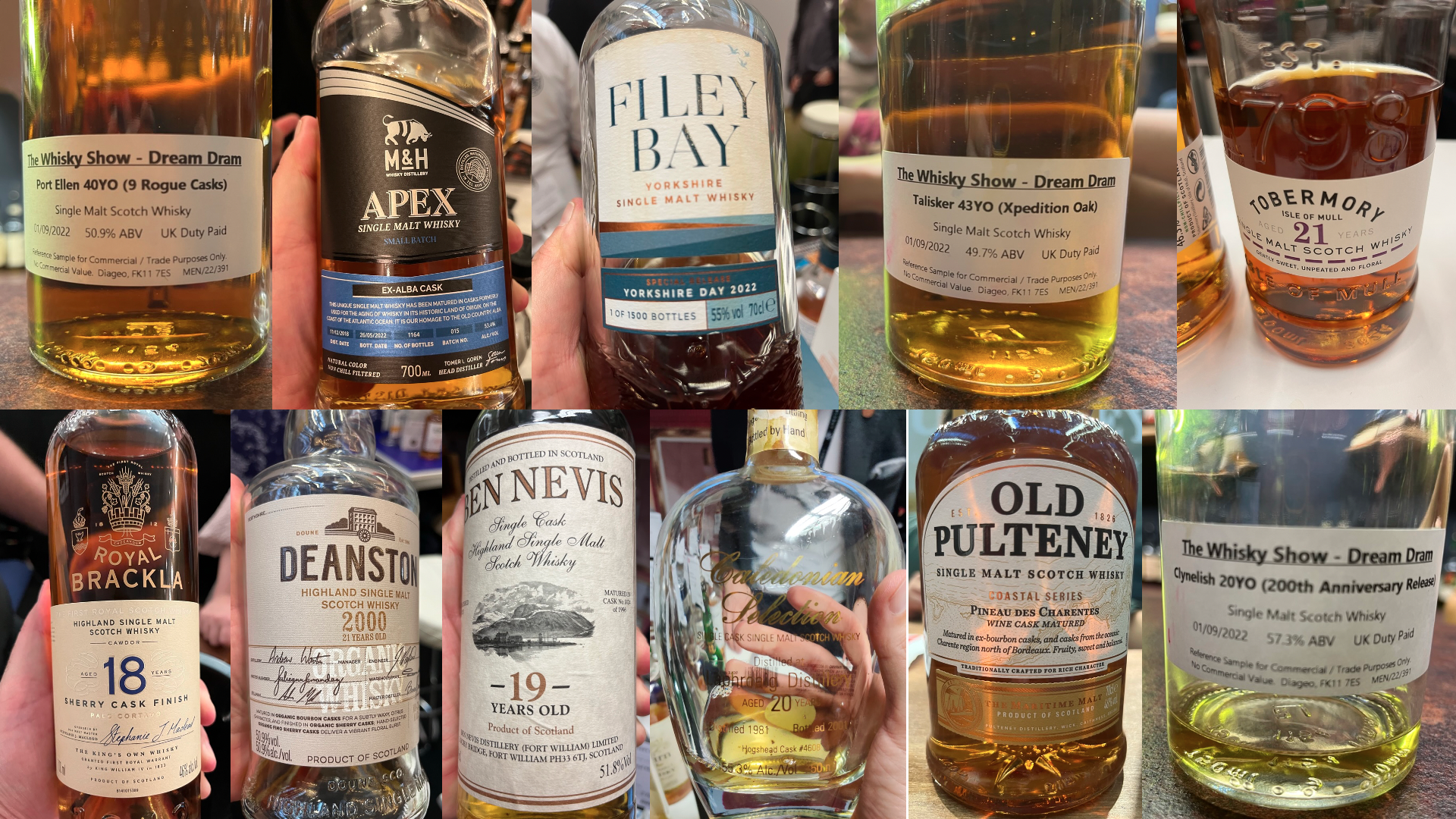 After three years away from the London Whisky Show, (2019 due to a scheduling conflict with the Rosh HaShana, and then COVID) I have at last returned to the Show. From being the only Israeli visitor to the show in 2014-2016, this year’s participation has gone to a couple of dozen Israelis, in part because it didn’t conflict with the Jewish holidays. This reflects the place the local Israeli market has gotten over the past six or seven years, going from a small group of aficionados to a national “Whisky Lovers” Facebook group of some 20,000 members, with 6 regional groups, each organizing tasting events and even group bottlings. There is also a steady import of independent bottlings, alongside most of the corporate whisky distilleries in Scotland. But we’re here to talk about the show: There were more booths and producers than ever before, and even with three days at the Show, one couldn’t possibly taste all that was on offer. I tasted 96 out of the 1014 drams on offer. If memory serves me, in my first show in 2014 there were just over 500 drams showcased, and the whole show fit in the very compact space at Vinopolis, so this is a whole new ballgame.

Two other things stood out this Show. The first is the sheer number of new distilleries out there. From new ventures by old independent bottlers to stunning one (wo)man shows (or small independent ventures), one of which was definitely the surprise of the show for me. The second thing is the new face of the whisky crowd. I’m so delighted by the number of women at the show, on both sides of the stands. From being a “man’s show” in the last decade, it’s definitely a “person’s show” now. Just look at this picture, which to me is the new, true, face of whisky: And this one with Annabel Thomas of Nc’nean distillery, where her vision drives everything from production to design (and which deserves its own post): Another significant change is, of course, the pricing of whisky. This had a direct impact on the dream dram pricing, as well as on the masterclasses, of which I took none (first time ever!). I won’t turn this post into a general lamentation on prices, as we all feel it and everything that there is to say about it has been said. However, if you want to know just how much things changed, note these two changes in the show: First, there was a Karuizawa dream dram on sale for 35 token (that’s £350 for 10cc). In the first Show I visited, a bottle of Karuizawa 30 was sold for £360. There were also drams ranging from 15 to 5 drams (£150-£50 for 10cc) whereas 3-5 was the top limit in years past (in 2016 7 tokens got you a dram of Glenfarclas 60 years old, this show the 53 year old set you back 15 tokens, that’s more than double for a younger whisky). The second thing is that not only have the masterclasses become VERY expensive (but that’s to be expected with the prices of whisky being what they are), I feel that the quality and attractiveness have gone down significantly. In the past, masterclasses were composed fully of special bottles, brought in ONLY for the masterclass and unavailable to taste on the show floor. This year, almost all of the masterclasses included whisky available at the stands for dream tokens, and Balvenie even included a dram which was a free pour at their stand!!! In the Tomatin masterclass three out of the four whiskies featured in the most expensive masterclass of the show were dream drams available at the stand, two of which would have set you back only 5 dream tokens together (yes, that’s 50% of the whisky poured in a £375 masterclass for £50. The third dram, by the way, would have only set you back a further 11 tokens, and was also available at the stand)! I truly fail to see the point of registering to masterclasses under these conditions, and I won’t even mention the absence of some of the notable presenters of some of the masterclasses, since health issues really can’t be controlled.

But setting these gripes aside, there was plenty to taste as the show was bigger and more diverse than ever before. There were some really great opportunities to meet up with some people I’ve known since that very first show I’ve attended, as well as to meet new fascinating and very talented people of whom this industry is full. I was at the show with great friends, and really had a great time.

I have not taken tasting notes during the show (there was really nowhere to sit down quietly and do that), but I do want to mention a few drams, stands and producers that were “best in show” for me (taking into account that I only got to just under 10% of the drams available at the show). I’ll start with naming my drams of the show, in no particular order. Drams of the Show….

Diageo had their usual strong showing with their very wide stable ranging from the Port Ellen 40 year old Nine Rogue Casks, two old Taliskers (the 43 year old Xpedition Oak which was a wonderful tipple and the 44 year old Forests of the Deep which we didn’t get around to tasting), through the 20 year old Clynelish 200th Anniversary Release (as well as a lovely 23 year old Blair Athol), a lovely selection of old Flora and Fauna bottles from various distilleries going all the way down to Singleton and Johnnie Walker. Colin Dunn had a cozy little ‘salon’ set up in the booth, and was entertaining as always.

Distell’s Master Distiller Brendan Mccarron, whom I know from his days with Glenmorangie, was at the three Distell adjacent booths. It’s clear that an effort was made to put Deanston in the forefront, both with the placement of the booth and with two very strong showings in the 2007 Calvados Finish and the stunning 21 year old Organic 2000 vintage, which was chosen to be part of my top 11 list. Distell also had perennial favorites from Bunnahabhain, but stole the show for me with the new Tobermory 21, which is a true stunner.

The 1981 Laphroaig 20 year old and the Ben Nevis 19 were featured on the Whisky.Auction stand (though, honestly, there must have been 20 other drams there that could have easily made this list, including my first dram of the show, the G&M 1969 Port Ellen or the 1979 SMWS Balvenie (40.4 at 59.8%)). Old Pulteney is starting a new annual ‘Coastal Series’ and the first offering in Pineau des Charetens casks is beautiful. The next two stunners are a bit opposite. While the Milk and Honey Apex ex-Alba is an outstanding one-off batch of M&H matured in casks that were used to mature Ledaig whisky in Scotland, the Royal Brackla 18 is a stunning core range bottling that finally got the upgrade to 46% that was promised when Bacardi announced the move in (I think) 2015 and released Craigellachie and Aultmore. It took some time for Royal Brackla, but here we are with a 12 year old classic Speysider, but with a mind blowing Palo Cortado finished 18 year old, which will definitely be joining my whisky cabinet during this coming year, together with most of the whiskies mentioned here.

Last but not least, I want to mention my surprise discovery of the Whisky Show. Spirit of Yorkshire is a distillery that started out working with the late Dr. Jim Swan, but had to continue pretty much on their own after his passing. The distillery was started by David Thompson, an expert in crop science and Tom Mellor, a farmer as a working farm distillery with a very interesting distillation regime where half the spirit goes through a rectifying column after coming off the pot still and half does not. They also have a very clear philosophy on batches and vatting. To me, this distillery is a geek’s paradise. The whisky they produce, from the Flagship, through the three batch finishes – Moscatel, STR and Peated – is extremely good. Their less easy to come by cask strength (or high strength) expressions, of which I tasted two, a PX Sherry cask and the Yorkshire Day 2022 – are downright stellar.

I’ll end this report on the Whisky Show with what to me was a true shock. You all know I’m a huge Glen Garioch aficionado. I was very saddened by the weird, yet true, fact that out of 1,014 bottles on offer to taste, not one of them was Glen Garioch.
NOT A SINGLE BOTTLE!

I look forward to seeing where the show will be heading next year now that the Whisky Exchange is under the ownership of Pernod-Ricard, but we’ll leave that speculation to another post.