I have always been careful using the term “best whisky in the world”, “whisky of the year/decade/century/millennia” or “platinum, gold, silver, bronze, copper, aluminum, tin” awards because those terms and their likes are obviously totally meaningless. In fact, I don’t even score my reviews using a numeric scale, as our palates and noses are not calibrated every day, and there’s obviously no way to consistently score 88 and 89 (or 92 and 93) differently and accurately (even for you)?

But once in a blue moon, you taste a real outlier. A whisky that can, however tentatively, shoot it’s way up to a place of sheer delight and absorption,  leaving you at a loss for words. When that happens with a whisky from your favorite distillery, it’s even more special. Of course, if it’s from your favorite distillery, you will need some outside confirmation that you’re not being biased, so you’d best taste said whisky with a friend or two, just to confirm.

I recently had such an opportunity to taste one of the scarcest expressions on the planet, and to do so with close friends. There were only 138 bottles to come out of a single 1973 sherry butt, bottled to celebrate The Whisky Exchange’s 15th anniversary. This Glen Garioch bottle came a few years after bottling a 1971 Glen Garioch for the first Whisky Show, in 2011, also at 40 years old, which was a bourbon cask with a yield of 194 bottles. 1971 was a year with very little distilling activity at Glen Garioch, but produced both this cask and the legendary Samaroli 1971, a bottle of which recently sold at auction for £7100. Glen Garioch only got back to full production in 1973, with a new water source and the installation of a second set of stills, and this expression is part of the work done in that monumental year. 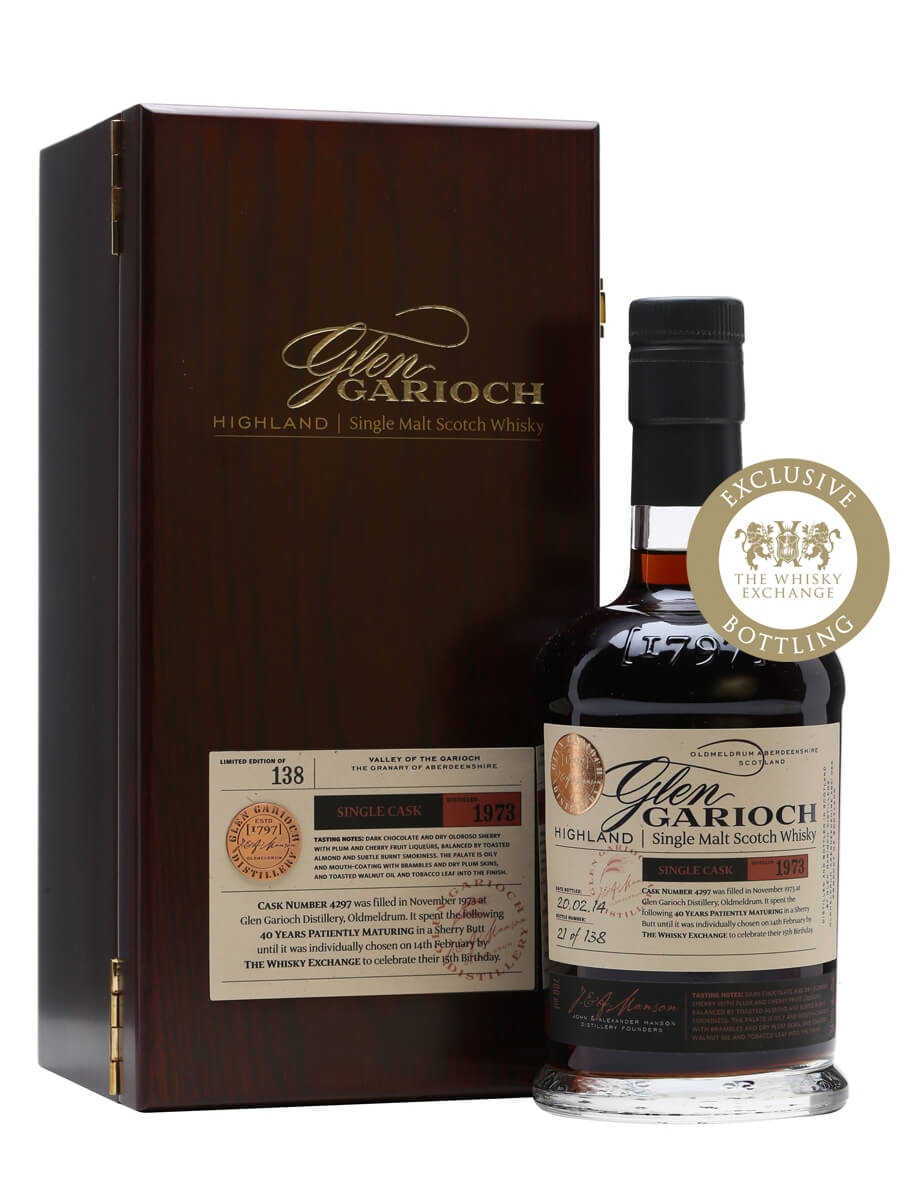 Appearance: Dark mahogany, thick and slow droplets that stick to the glass and roll down very slowly.

Nose: Treacle and loads of dark, dried fruit, a hint of peat, apricot and cherry compote, sultanas, oak, wood spices with a touch of burnt wax. Time in the glass brigs out lovely hints of burnt rubber and struck matches.

Linger: Dry spices with a very dry feeling on the tongue, almost chalky. Pepper and cinnamon, a touch of bitterness with an afterthought of tobacco leaf smoke (like a cigar) that’s fairly subtle, but goes on and on.

WOW! This is the most complex, layered dram I’ve had in a long time. Despite the level of detail in my tasting notes, I honestly don’t think I’ve gotten fully to the depth of this dram, and would have loved an opportunity to spend a whole evening alone with it in my preferred whisky glass (rather than the Glencairn I had).