There were few drams I dreaded tasting like this one.

Seriously, I did absolutely nothing to acquire a sample of it when it came out, and I avoided it like the plague. Until it came to my Malt Mongers Israel whisky club in Tel Aviv, and I really had no choice but to partake.

Laphroaig 30 should be a no brainer, right?

Well….not if you’ve tasted the OLD version of the 30 year old (produced exactly 20 years ago, while these casks were slumbering in the first of two sets of ex bourbon casks (twice matured….), and it was so outstanding, that I feared that nothing modern could possibly be as good.

Check out that review before continuing, by clicking here.

So it was with great trepidation that I approached this dram. I have to say that right off the bat it has an uphill battle, given that I quite like sherry influence, which the old 30 had and the new 30 lacks. So with no further ado… 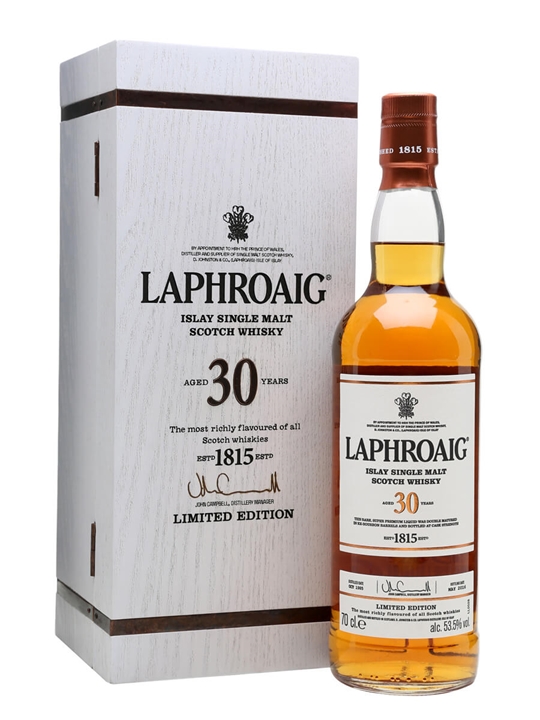 Nose: Honey, smoke (not really peat), fresh raspberries, vanilla, hint of brine, with a faint hint of TCP. There’s a very fresh fruitiness, like a mountain dew mellon (green melon) freshly sliced and a rich sweet aroma. It’s surprisingly fresh for a 30 year old, and I’ll venture that some first fill bourbon casks in that second maturation have a lot to do with it.
A few drops of water intensifies the honey, but flattens out the fruitiness. A few moment covered in the glass bring out a whiff of some wax, hinting at those 1980s casks…

Palate: The palate is 100% Laphroaig, with the peat mixing with white pepper and fresh pomelo rind. There’s an underlying sweetness, and a dry note.
A drop of water brings out ash on the palate and sharpens the pepper, with a slight hint of chocolate.

Linger: Spicy and long, with pepper and a sweet layer on the tongue – leaning toward the spicy, with a ring of smoky spices around the gullet. The dram leaves the mouth dry, with some oak coming through, and this is where the age is properly felt.
A drop of water prolongs the already long linger, taking the warming effect of the dram deep into the belly.

This is a good dram, but it’s not a grand one. I would have really expected more of a Laphroaig 30, even without having been privy to the old version. It’s also less complex than the 200th anniversary 32 year old (reviewed here).

Compared to the old version, my fears were substantiated, and the old 30 remains, by far, the most incredible Laphroaig I got to enjoy so far.