Yes, the new GlenAllachie core range (or Foundation Range, as the distillery calls it) does start with a 10 year old, but it isn’t really the entry level expression for the range. Thus, I’ll begin my review of the range with the 12 year old, and move forward from there. 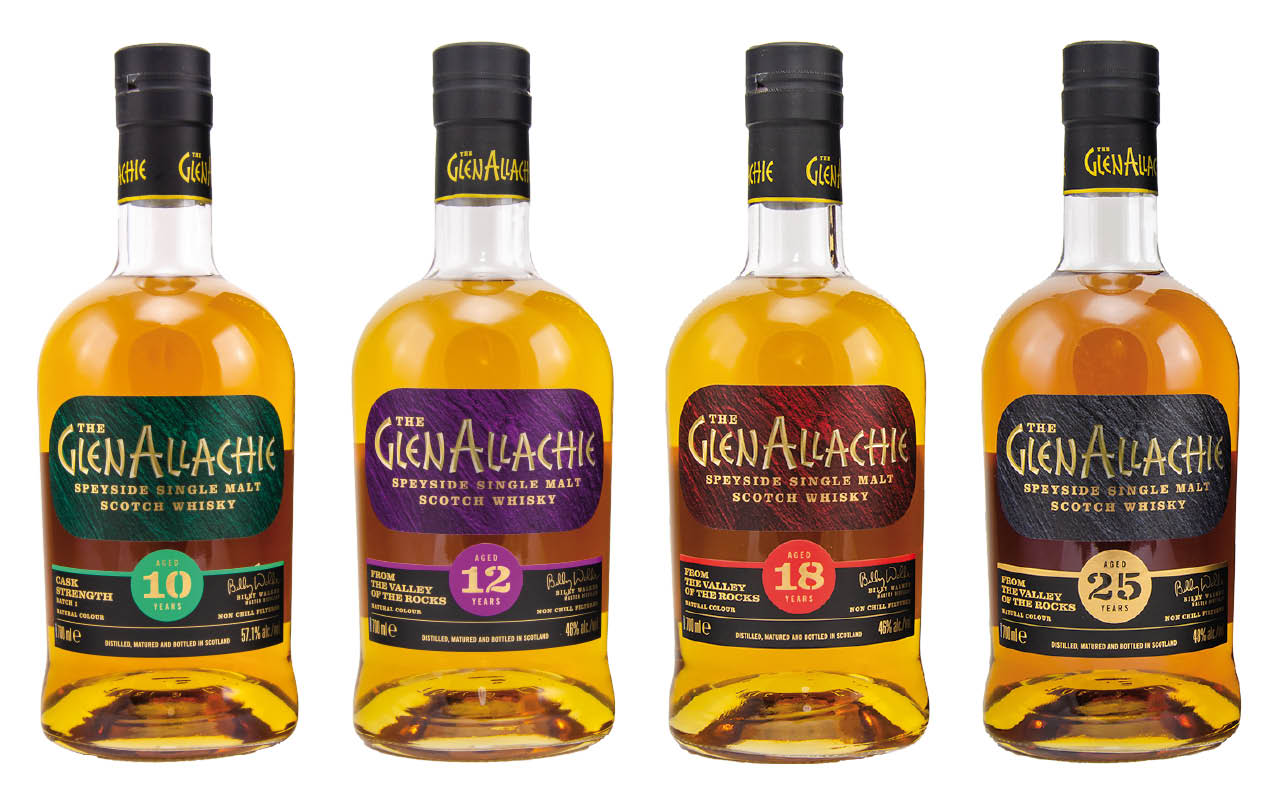 We’ll start off with noting that these expressions are typically Billy Walker. As he’s done with GlenDronach, he’s used existing stocks to make a rather standard core range (with or without a 15 and a 21 respectively). They are presented at 46% (or cask strength), non chill filtered and with no coloring.

The distillery was opened in 1967 to produce whisky for Mackinlay’s blends, which became part of Invergordon Distillers in 1985. It was then mothballed, and subsequently sold to Campbell Distillers, eventually landing it in the Pernod Ricard stable in 1989. It makes up a significant part of the MacNair’s and the White Heather blends. In August 2017, a partnership of Billy Walker (post the BenRiach/Brown Foreman exit), Trisha Savage and Graham Stevenson bought Glenallachie from Pernod Ricard, with the two blends and enough stock to bring the distillery to the point of selling whisky distilled under the current ownership.

The core expressions announced were a 10 year old at cask strength, 12, 18 and 25 all at 46% ABV. This is all, obviously, old stock. The changes made in the distillery are interesting, and I look forward to seeing what they’ll do with it, although I do have a tinge of fear. The distillery character up to 2017 was light and fruity. That’s not the style that Billy Walker wants. Rather, he’s taken the fermentation time to almost three times what it is in most distilleries, 160 hours (!). To facilitate this, Billy has taken production to just 20% of capacity (800,000 LPA instead of 4 MLPA). This is done in order to get a massively fruity and not very light character, which I assume will be augmented with a different distillation regime.

Another change is that now 25% of the production is going towards peated whisky. I like peated whisky as much as anybody, but after the GlenDronach Peated offering by Billy during his time at the helm at GlenDronach, this leaves me a bit uneasy. That GlenDronach should have not been bottled for another few years, and I fear that we might see a repeat of that here.

The 12 year old is made from whisky matured in Pedro Ximénez, Oloroso and virgin oak casks, which explains quite a bit of what’s going on in the bottle.

Nose: Fruity and malty. With Golden Delicious apples, light cinnamon and white pepper, some dried apples and dried apricot.  After a bit of time, wine poached pears join the party with a touch of banana. Honey and some coconut, with a hint of brown sugar. There’s also something buttery and nutty in there

Palate: Balanced, with a gentle fruity sweetness giving way to mild spice. I’m getting butterscotch, cinnamon and some pepper, yellow apples and some mild bitterness, like you would get from grapefruit pulp, only without the grapefruity flavor (if that made sense…)

Linger: Warm and spicy, with the spice staying for a long time down the gullet. There’s a lovely dryness left after the dram with quite a bit of butterscotch on the tongue. The insides of the cheeks tingle a bit with that dryness.

Honestly, this might just become my go to unpeated Speysider everyday dram. I say unpeated, becuase you always have to contend with Benromach when you’re on the subject of daily sippers from Speyside. This is a very coherent dram, where the palate delivers what the nose promised.