On Independent Bottling and a Tasting of a Boutique-y Ardbeg 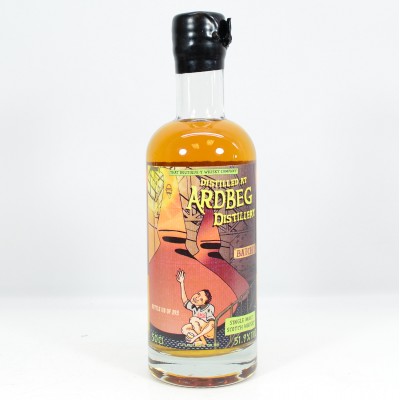 I’ll be tasting That Boutique-y Whisky Company’s Ardbeg batch 4 today, but I’ll talk about the Ardbeg Distillery in another post, in this one I want to mention the independent bottlers and their importance to the whisky industry.

Truth be told, Independent Bottlers are an industry curiosity and a relic of times long gone. Obviously, in the past single malts were not marketed as such, and were sold to blenders for use in their blends. Many times, between the distilleries and the blenders were whisky brokers, who sometimes took some of the whisky and bottled it under their own label (or a special label). As the market for single (and vatted) malts grew in the latter quarter of the 20th century, so grew the official bottlings, on the one hand, and the independent bottlings, on the other.

While this is in no way unique to the whisky industry (just think of your local supermarket’s own brand for canned goods, dry goods and plastic bags), it’s worth noting that the reasons are (for the most part) not brand or price related, rather they arouse out of curiosities of  the industry:

Some distilleries do not want single malt stock out there for independent bottling (Balvenie coming to mind here), so they’ll teaspoon a small amount of another single malt into the cask, thus making it a vatted malt which cannot be labled under their brand (in which case you’ll see a label like “X Year Old Speysider”). Yet other distilleries actually built their entire reputation on a rich history of  independent bottlings. In fact, sometimes it was the independent bottlers who actually paved the way for an official bottling to enter the market at prices that bypass the normal brand building stages, i.e. Diageo’s Mortlach, which is a whole new kind of crazy I don’t even want to get into here (I’ll probably rant about it in a tasting post I expect to have after The Whisky Show in October). In other cases, independents buy casks from distilleries either to bottle as single malts (either from single casks or they might even do a vatting of casks creating a single malt) or for the production of a vatted malt (also called a malt blend) such as you would find produced by Wemyss Malts; Douglass Laing Co; The Compass Box and  the Boutique-y Whisky Company.

Oh, and what’s with the cartoon-y labels, you ask? Well, the idea is to make it different, to make it collectible, and they say so right on their website.

Nose: Initially old ashes with hints of pines on a rainy day with some iodine, then sweet flowers (honeysuckle mainly) and watered down balsamic vinegar. A drop of water brought out more of the iodine, honey, some smoked fish and a little more peat and together with whisky flavored pipe tobacco.

Palate: Alcoholic and sweet, then bringing a burst of peat on the tongue, with some notes of citrus.

Linger: A long, dry, ashy linger, both down the gullet  and in the mouth, bringing some lingering sweetness and hints of acerbity on the tongue and the inside of the cheeks. A dollop of water heightens the sweeter notes of the linger.

Just how different is it from the Ardbeg 10? Well, the official Ardbeg expression is bottled at 46% ABV and never develops that flowery note on the nose, rather keeps to that crisp lemony peat. Another big difference is that nosing the whisky once you’ve tasted it, the nose on the 10 year old  becomes almost like flaked coconut, with the peat taking the back seat whereas the Boutique-y never quite gives up its hold on the peat.

All in all…hey, it’s an Ardbeg. How wrong could you possibly go?