Caroni is the Port Ellen of rum, or so goes the common perception. Both were distilleries that were largely overlooked when they were operational, and achieved legendary status post mortem. 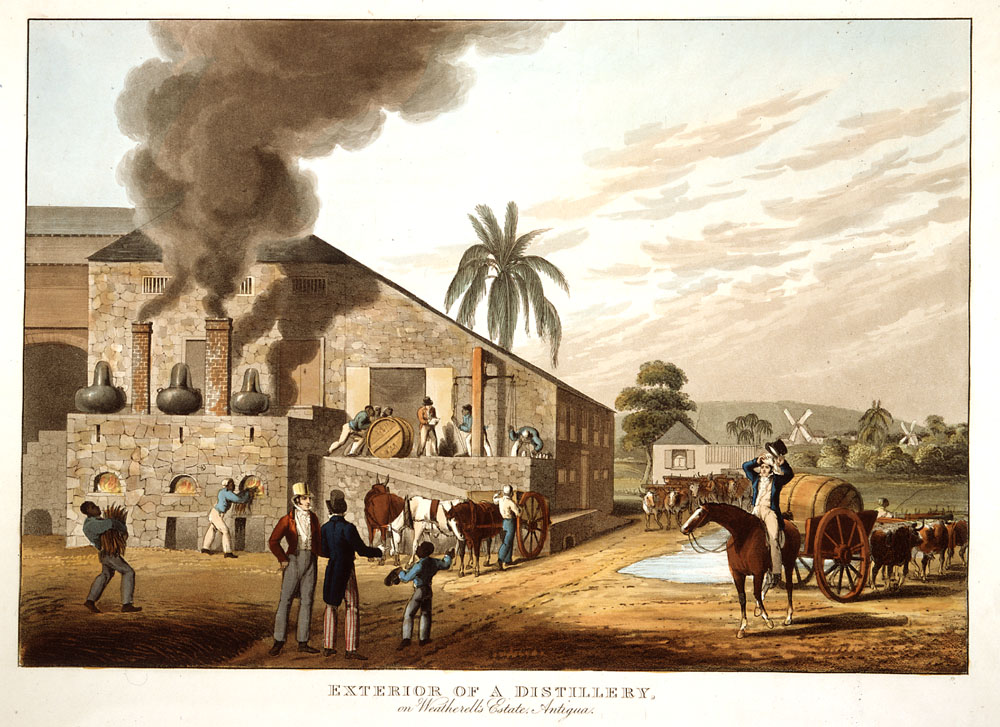 An Antigua rum distillery in 1823 via University of Virginia

Caroni was estblished in 1918 (or 1923, both sources I have are equally positive they got the date right), at a time when Trinidad had over 50 rum distilleries. By 2003, when Caroni closed due to the closing of the adjacent sugar factory, only Angostura survived. It’s worth noting that until 1984, the distillery had wooden coffey stills and a steel pot still. Both were replaced in 1984 with modern stills from Scotland (and a copper pot still). Caroni made two types of rum: Heavy rum (first part of the distillation with rich flavors) and light rum (comes out at almost 96% ABV and is the soft basis for the rum blend, much like grain whisky is to malt), which are usually combined to create the blend.

Nils van Rijn is the owner of the Dutch store Best of Whiskies and of The Duchess bottling, and he personally selects the casks that get bottled. In the rum series, he also has a Belize 10 year old and a Guadalupe 19 years old, which we’ll taste in our Rum Club in the near future.

Nose: Molasses and caramelized sugar, vanilla, cinnamon, sweet orange blossom, pears poached in wine, and a lot of the cask. Oaky and woody, yet fresh. The sugary sweetness and the cask’s wood intertwine beautifully.

Palate: Sweet attack, then pepper and earthy notes with a burnt rubber and a touch of diesel fumes all wrapped in the very present oak.  A second tasting brings tropical fruit with hints of guava and mango with a bitter citrus rind towards the end of the sip.

Linger: Peppery and dry, with spice around the gullet and the tropical fruit on the back of the tongue. The dryness and fruitiness remain, with that dirty “garage” in the background.

Like I said earlier, this is a rum for whisky lovers. It’s complex, not very sweet, and has a lot to discover. The Caroni dirtiness works beautifully here without overpowering the rum, and the wood plays so nicely with Caroni’s dirty character.

Tasted at the Israel Rum Club, and official sample used for taking notes.

It seems that my opinionated review of the 16 year old Local Barley on Friday ruffled some feathers at Springbank, and I got quite a bit flack for suggesting that the distillery was in any way unfair in its pricing strategy. So much so, that I published a very (very!) rare clarification on the blog post itself, which you can see here.

I have seen great passion and dedication on the part of the distillery employees (one of whom was on vacation, and took the time to comment and set things straight) and of fans of the distillery, and this is heartwarming. Indeed, there are few distilleries that evoke so much passion and personal commitment as Springbank is able to do. And why not? The distillery is as close to its community as can be, and is as close craft distilling as they get, with a solid commitment both to quality and to value. My feeling that the 16 Local Barley was overpriced is a specific comment, which does not detract from the high regard in which I hold Springbank and its integrity.

OK, so one of the great pleasures of so many of my fellow aficionados, is getting hooked on a specific type of style or finish, and among my friends, rum casks rank pretty high on the list. And when it comes to rum casks, few can beat Springbank, with a supply of fresh rum casks, many specifically from Jamaica.

Palate: The peat comes through with an almost piney quality. Not overtly sweet, with a layer of it just beyond the actual taste, if that makes sense.

Linger: Peaty and lightly spicy, with hints of pepper and some paprika, and the rum playing. A long tingle remains, like after sipping too quickly on hot tea, and not much else.

Good, fun bottling, not something that will knock your socks off, but not every good bottle of whisky needs to blow you away. Good, solid whisky is just that…