I’ve been waiting for over a year and a half to write this post, although I had no idea back then it would be called Affinity.

The beginning of the story is at the 2017 Whisky Show in London, where I took part in a great masterclass led by Becky Peskin bringing whisky makers to short but small “dates” with a table of six or eight whisky aficionados. In the third round, my table was joined by John Glaser of Compass box.

John poured us a dram from a bottle labeled “Project Overlord”, and said that the dram has something to do with an Operation with the same name. Now, I know that the Allied landing in Normandy, in June 1944, was code named ‘Operation Overlord”, but what could possibly be the connection?

Well, things became very clear once I nosed the dram. This wasn’t whisky. All of a sudden the Normandy connection became clear, as this was clearly Calvados. But it wasn’t! There was whisky in there, with creamy barley and a lot more spice than I’d expect from a Calvados.

That was a “simple” vatting of some unnamed Calvados and Compass Box’s Spice Tree, offered at 43%. Coming to think about it, that’s probably simply the Spice Tree’s 46% and the Calvados’ 40% averaging each other out.

Affinity is a bit more complex than ‘Project Overlord’, with the Calvados third of the drink (OK, it’s 37.5%, not 33.3%, but 3/8 is close enough to 1/3) matured in French oak barriques. The whisky part of the parcel, the other 5/8, were matured in first-fill sherry butts (Craigellachie finished for a year, comprising 20% of the mix), 29.5% matured in varying toast levels custom French oak casks and some blended whisky matured in refill Sherry butts making up 13% of the drink. 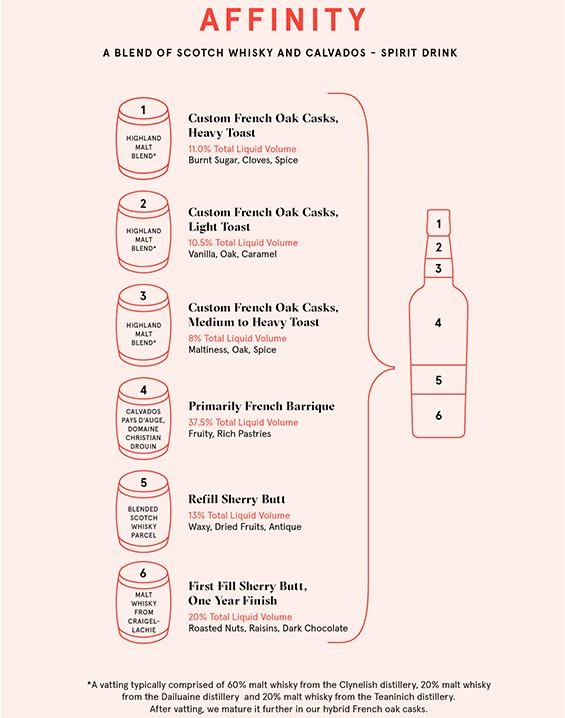 Project Overlord (43% ABV, I assume it was NCF and NC)

Nose: Dry and very fruity, with the pears jumping out at you, followed by the apples. White pepper and hints of white dessert wine, with an earthy note and some creamy barley. Some wood spices, namely cinnamon and nutmeg show up too.

Palate: Dry apples, with green apples mixed with yellow apples in there, black pepper, with cinnamon and a drop of a hotter pepper

Linger: Dry and spicy, with the gullet and tongue carrying most of the pepper. The inside of the cheeks tingle, with a dry and chalky mouth feel.

Appearance: Same gold, the legs are thinner and a little slower forming than the PO.

Nose: Earthy and richer, with the fruit a little toward the “green” side. Baking bread and some damp dirt. A rich creaminess, with a lot of the Calvados character apples. Notes of vanilla and red wine, with a sprinkle of cinnamon appear. There’s also a floral note in there.

Palate: Very spicy, hot and peppery, which obliterates the mildly sweet honeied first wave. The fruit and the Calvados are there, they’re just behind the pretty harsh spices. You get apple and pear,

Linger: Peppery tingle on the tongue, with a hint of citrus rind and cardamom. It’s relatively long and spicy, but the sweetness of fruitiness is less present.

For me, Project Overlord was a better sipper, while Affinity wins on the nose, which is both sweeter and richer. That’s probably he effect of the sherry matured whisky in there. On the palate, the more complex Affinity delivers spice almost exclusively, which is a bit of a miss for a drink that could have merged the dry fruitiness of the Calvados with the rich creaminess I’d think this marriage should have taken. I can’t help but wonder if Oak Cross wouldn’t have been a better choice than Spice Tree for this cross Channel marriage…

Bottom of the Page